U.S. policymakers have spurned free competitive markets by using preferential policies to create energy monopolies and oligopolies, and pick winners and losers among fuel types. They have created monopolies and oligopolies that produce and use mainly unsustainable oil and natural gas fuel supplies, along with unreliable wind and solar energy. By preventing competition, fuel diversification and innovation, they have increased the risks of economic and environmental crises, and even war, in the near future.

U.S. politicians favor the Organization of the Petroleum Exporting Countries (OPEC) with immunity from antitrust law, and also military protection. OPEC is comprised of 14 member nations, mostly located in the unstable Middle East and having authoritarian governments with nationalized oil monopolies that deprive their people of economic freedom. The oil cartel has the world’s lowest-cost oil reserves and has provided about 60 percent of global oil exports. OPEC has caused cycling and volatility of global oil prices by limiting production for gouging with high prices, and after that causes overproduction and low prices, by increasing (or maintaining) production to wipe out competitors with predatory pricing. OPEC is now in the process of wiping out the U.S. shale oil industry.

U.S. politicians have also favored domestic Big Oil & Gas oligopolies, like Exxon Mobil and Chevron. Their costs for producing oil, and by-product natural gas, have been reduced with preferential access to government-owned natural resources land at no charge or below fair market rate, tax shelters, and environmental exemptions. In 2005, President and former oil man George W. Bush favored large oil and gas companies promoting fracking technology in shale rock by leading legislation granting immunity from key provisions of the Safe Drinking Water Act. The U.S. has become dependent on ill-fated shale fracking for over half of oil and two-thirds of natural gas production.

U.S. politicians have granted monopoly franchises to natural gas and electricity distribution utilities controlling gas pipelines and electricity grids, respectively.  Natural gas supplies, which are unsustainable, are bought from the domestic oil and gas industry for transport and resale to customers. Electricity is produced, transmitted and sold from power plants fueled largely by unsustainable natural gas supplies bought from the domestic oil and gas industry, while renewable energy is added under government mandates and subsidies favoring unreliable wind and solar energy. All states have favored monopolization of their entire natural gas and electricity industries, whether through traditional regulation or so-called “deregulation” also involving excessive regulation:

Oil and gas account for 67% of total U.S. energy use, compared to 13% from coal, the next highest source. U.S. energy policies favor the use of oil and natural gas for all three major energy applications:

Each usage accounts for nearly a third of greenhouse gas emissions. Yet, recent environmental regulations have affected mainly the electricity sector and increased the market share of natural gas at the expense of coal. The U.S. fuel mix is often compared to Germany, which has used renewable energy to reduce the use of fossil fuels to less than half of electricity consumption. However, Germany prefers coal to natural gas, as fracking is banned for environmental reasons.

U.S. politicians, especially Republicans, favor oil and by-product natural gas, even though the U.S. is among the world’s highest-cost oil producers. Since 2015, fracking for oil and natural gas has failed to attract much investment even at oil prices as high as $60 a barrel. U.S. politicians have stood by as world markets have been heading toward increased reliance on oil exports from OPEC again. This is increasing the possibility of oil and natural gas price spikes, which have preceded 10 of the last 12 recessions. Moreover, the Middle East continues to host the world’s major war-zones, and even more risk is posed by Trump’s baiting of Iran and abandoning Syria to Russia.

Fracking for oil and gas also poses environmental risks. The Environmental Protection Agency (EPA) has found fracking is a threat to U.S. water supplies. It is the only industry allowed to inject known hazardous materials (whose specifics are largely undisclosed) directly into or adjacent to underground drinking water supplies. Fracking also releases greenhouse gases that, when added to emissions released during the burning of natural gas for generation, may contribute more to climate change than coal power.

Meanwhile, U.S. politicians disfavor coal power, including even mandating the closure of coal plants. Coal was often a more economic fuel than natural gas for power generation, before the U.S. passed new environmental regulations against it, and unlike fracking, strictly enforced them. The U.S. is also disfavoring coal by favoring wind and solar energy, since natural gas power plants can more economically follow the fluctuating loads from the renewables. The loss of coal markets has impoverished many local coal mining communities while reduced coal usage has made the nation more dependent on unsustainable supplies of natural gas.

Wind and Solar Favored over Bio-energy

Renewable energy accounts for 11% of U.S. energy use. The country has gone from preferring bio-energy for all three energy applications of renewable energy development to now favoring wind and solar energy: 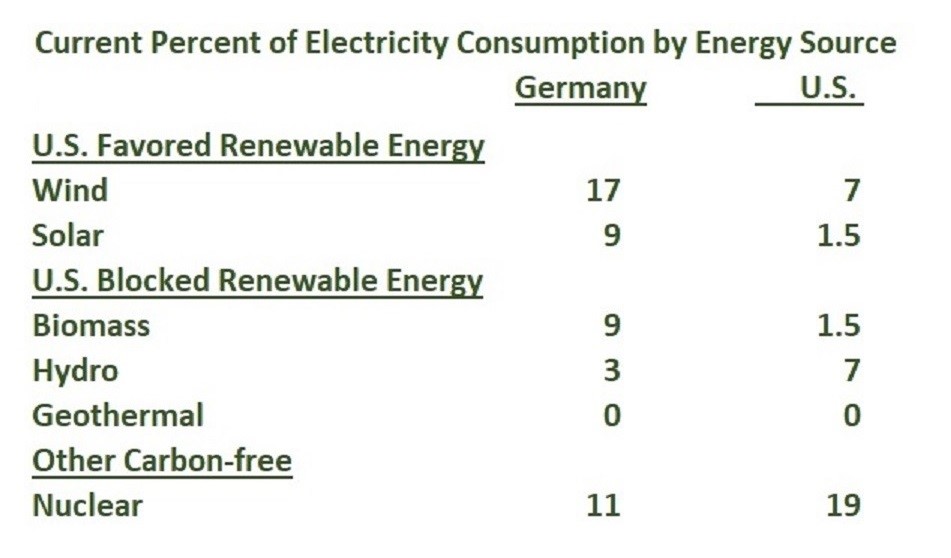 U.S. politicians, especially Democrats, favor wind and solar, while hiding the true costs. Wind and solar have been favored by subsidies offered through complicated tax credits or shelters that are not even based on environmental externalities. The biggest of the two major wind subsidies expired at the end of 2019, but Democrats seek to extend it again. It has expired and been later extended several times in the past.

In addition, consumer electricity rates have been increasing as electricity monopolies absorb the higher costs for transmission and load-following required by the intermittent outputs from wind and solar. Regulators and utility monopolies won’t disclose the economics and environmental impacts of using fossil fuel plants to follow wind and solar. They won’t even disclose the factors that could increase costs and greenhouse gas emissions, including the types and percentages of plants following wind and solar, especially fast-ramping plants, and the reduced effectiveness and efficiencies, as well as increased maintenance costs, at the plants.

At the CNN Climate Crisis Town Hall with Presidential Candidate Elizabeth Warren, moderator Chris Cuomo cited Germany as a model when asking: “When it's bright and sunny, they generate so much wind and solar that it can flood the market and puts the wholesale price almost to zero. When it's dark in the wintertime, when they need the power, they have to use nuclear, they have to look for other sources. Can the ambition meet the reality of phasing out fossil fuels?” Senator Warren replied that she would “put a lot of money into” the research and development of storage technologies.

The U.S. will likely be able to continue adding wind and solar since the intermittent loads can be exported throughout regions, and national levels are still low compared to Germany. However, the plan of many Democrats to rely solely on wind and solar for electricity and transportation needs will fail without significantly more breakthroughs in storage technology. Since wind and solar can’t currently replace much oil or gas economically and likely even environmentally, the renewable energy is doing little to reduce the risks of future crises.

Meanwhile, U.S. politicians are suppressing bio-energy. Since the 1990s, electricity mandates and subsidies favoring wind have made biomass power uncompetitive, and some states like Minnesota have even mandated that renewable electricity be supplied by only wind and solar. After U.S. ethanol mandates drove up production and grain prices too quickly from 2005 to 2008, the nation enacted mandates requiring production from the cellulose in biomass fiber, even though it costs too much to process.

Brazil has shown it is possible to grow high-yielding renewable energy crops like sugar cane for the production of low-cost vehicle bio-fuel when the biomass waste is used for fuel-efficient electricity cogeneration and the waste heat is used for process heat. Only when utility monopolies in Brazil have blocked the sales of excess electricity have the abundant wastes become a disposal problem and made costs less competitive.

The U.S. has not been adding nuclear power plants while Germany has mothballed about half of their plants. Nuclear power hasn’t been growing since new safety regulations increased costs in the 1970s. However, the U.S. industry is still favored by the Price-Anderson Act, which provides a cap against liability claims arising from nuclear incidents.

The U.S. government should de-monopolize all energy industries by repealing OPEC’s immunity from antitrust laws and preferential policies favoring Big Oil & Gas, building electricity transmission and distribution lines and finishing the deregulation of natural gas and electricity utilities. Politicians should also stop mandating the replacement of coal with natural gas in power plants, and mandating and subsidizing their favorite low-carbon solutions. The libertarian solution, involving free markets along with a legal system that requires restitution for environmental damages, would likely mitigate risks much better than politics and regulation.