Overview: The US government monopolized housing finance by holding home loans at the Freddie/Fannie duopoly, insuring them through the Federal Housing Administration (FHA), and offering tax subsidies to homeowners. Local governments favoring cronies while issuing permits and labor laws forcing union membership have monopolized much of the rest of the real estate sector. 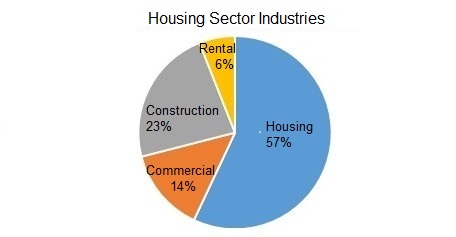 The US government has monopolized housing finance with government agencies and enterprises, along with federal home tax subsidies:

> US government regulations has long established government-sponsored Freddie/Fannie secondary home mortgage duopoly, Federal Housing Administration (FHA), and home tax deductions
> In the 2000s, US government regulations pressured a lowering of lending standards at the Freddie/Fannie duopoly, while pumping in easy credit at low interest rates, to artificially stimulate the housing sector and inflate home prices, which led to an eventual bursting of the housing bubble and the Great Recession of 2008.
> Because Fannie/Freddie couldn’t make enough risky housing loans, politicians also lowered lending standards at the Fed’s big banks, which were aided by the 1999 repeal of Glass Steagal that had prevented banks from making loans on securities. Some blame securitization by shadow banking, but unregulated banking wasn’t involved.
> Since both deposits and securities were vulnerable when the housing market crashed, politicians had the Fed print money and stopped the banks with Dodd Frank. But now banks are limited in their ability to make loans on deposits, so financing is being met by shadow (unregulated) banks, such as commercial lenders financed by wealthy.
> Before financial crisis of 2008, the US government encouraged insurance giant AIG to cover risky loans through its United Guaranty Corporation (mortgage guaranty insurance and mortgage insurance). AIG sold massive amounts of credit default swaps (insurance) without initial collateral, setting aside capital reserves, or hedging its exposure. After it needed a $180 billion bailout, the government took control.
> Bubble again now

Government regulations favor labor monopolies (that deny other workers the freedom to compete with them):

> Federal laws compel workers to join labor unions like the Teamsters, including the Fair Labor Standards Act, the National Labor Relations Act, the Civil Rights Act of 1964 and the Occupational Safety and Health Act.
> states use licensing to restrict many occupations, including plumbers and electricians.

President Donald Trump, who claims the nation needs “a businessman (like him) to bring us back,” provides an example of a businessman using government regulations to obtain monopolies:

> his success, mainly in real estate, was achieved with unethical practices made possible by of his own admission buying the same corrupt politicians that he blames for damaging the nation (and he makes no attempt to change these regulations).
> operates a real estate company, that along with construction companies, commonly practice hard-to-prove bribery and corruption to secure permits from politicians.
> has been using illegal immigrant workers (paid $4 to $6 per hour), and sued for failing to pay contractors.
> has been doing business with the mob, such as purchasing costlier ready-mix concrete sold by organized crime figures in New York (he has been accused of taking kickbacks from contractors).
> has used lenient bankruptcy laws to preserve his wealth from seven failed real estate businesses involving hotels and gambling casinos, which in addition to his failed ventures involving airlines, University, beverages, steaks, board game, etc., may have been the reason he had trouble raising legitimate money in the U.S.
> success is largely due to financing received for money laundering for oligarchs from countries like Russia while both sides benefited from lax U.S. reporting laws only allowed for real estate deals (which has made U.S. real estate more expensive and affordable housing more difficult to develop).
> has also benefited from an economy-damaging real estate bubble caused by low interest rates from the U.S. Federal Reserve Bank.
> has resorted to benefiting his business deals by becoming a politician himself, while violating the emolument clause, a move that has left him open to blackmail at the nation's expense, not to mention his resorting to becoming a reality TV character on the show “The Apprentice.”

(3) Monopolies are leading to economic problems, including history

Monopolies created by regulation have led to the high costs of urbanization. Financing subsidies favor larger homes for the middle class, urban sprawl and slums for the poor. Construction is least efficient US and global industry.

Regulations open these industries to monopoly control, including the Mafia. Their cronies get top union positions, sell jobs to work crews offering the highest bids and threaten legitimate crews. Mafia-run companies pay far less than union wages, use threats to keep out competition and own companies selling materials like steel or cement that overcharge other construction crews. Monopolization discourages innovation, including recycling.

(4) Economic problems can be solved by deregulation reform