Overview: Federal, state and local governments have granted franchise monopolies to local and long-distance telephone, cable and internet; Telecommunications Act of 1996 allowed monopolies to continue if they wanted; and the federal government has overly-generous intellectual property laws for information technology monopolies. 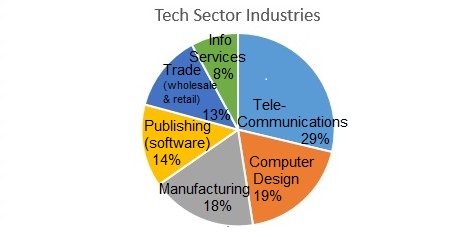 In 1913, the Federal government used regulation to create the AT&T telephone monopoly

> Federal Communications Commission (FCC) regulates interstate communications by wires (including telephone), cable, satellite, television and radio
> Each US state has a public utilities commission, which regulates privately owned telecommunications
> Most states regulate the cable industry and their rates at the local level (to the extent permitted by federal law)

> dominated by Regional Bell Operating Companies (RBOCs) and their affiliate BOCs (AT&T and Verizon duopoly, CenturyLink and also Fairpoint and Frontier, both purchased from Verizon)
> Competitive local exchange carriers (CLECs) are additional companies allowed to compete with the LECs, including AT&T in some localities and power companies (about 100 other franchised local telephone companies)
> an interexchange carrier (IXC) is a long-distance carrier that carries traffic between LECs

> dominated by RBOCs (AT&T, Verizon)
> RBOCs and LECs are allowed to compete under Telecommunications Act of 1996

Most states create monopolies by requiring cable companies to be franchised

The Telecommunications Act of 1996 was a joke that said the monopolies could compete if they wanted to. The Federal government failed to eliminate government-protected monopoly franchises for local phone, cable and internet services:

> LECs not required to provide access to their facilities for CLECs (in countries like the U.K., incumbent telephone and cable operators are required to lease their networks to competitors at cost.)
> local governments and public utilities block potential competitors by making it unnecessarily difficult and expensive to build new networks for:
(i) placing wires above and below public and private property (rights of way)
(ii) renting space for wires on utility poles or ducts (pole attachment contracts with public utilities)

The government has been trying to regulate broadband services (i.e., high-speed internet access through coaxial cable, optical fiber, radio or twisted pair) since the recent development of internet, cable and wireless services

> laws prevent localities and citizens from building their own broadband networks
> “net neutrality plan” seeks to regulate the internet monopolies as public utilities (like the phone industry)
> government spectrum auctions that sell rights (licenses) to transmit over specific bands (e.g. mobile phones) have resulted in corruption by collusion

(3) Monopolies are leading to economic problems

Industry monopolization (revealed from preferential telecommunications re-regulation and testimony of monopolistic abuses practiced by the Microsoft software monopoly against smaller businesses and entrepreneurs during their antitrust lawsuit) led to a slowing of business activity, bursting of the tech bubble, the 2000 economic crisis and further consolidation

(4) Economic problems can be solved by deregulation reform